Too Much Bike, or Not Enough? How to Bet on the Over/Under 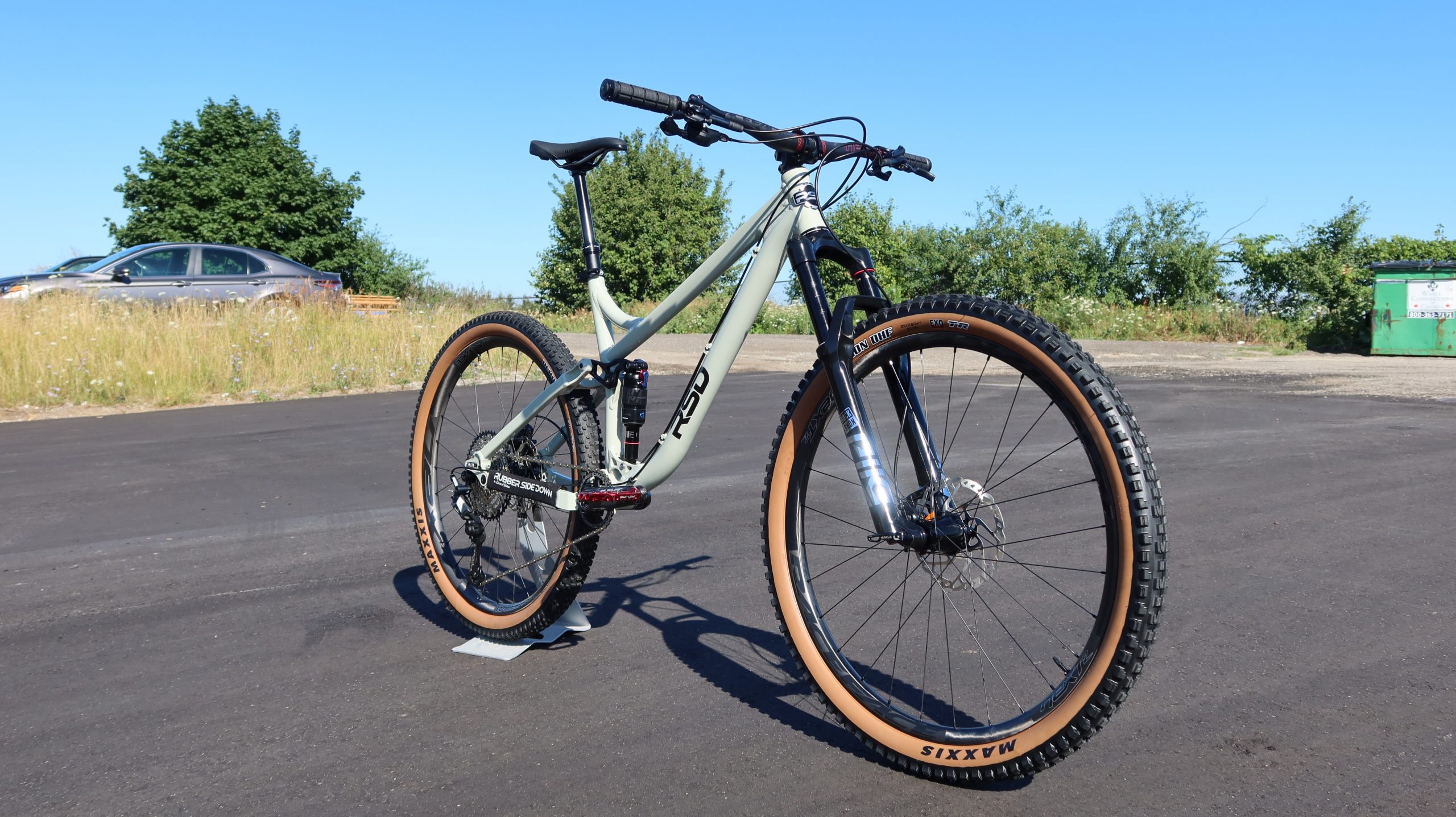 Too Much Bike, or Not Enough? How to Bet on the Over/Under

Media theory giant Marshall McLuhan famously asserted that “the medium is the message.” What that means in terms of mountain bikes, is essentially that the bike you choose to ride really determines the nature of the ride more than anything else.

If we take this for granted, then you can appreciate why the subject of under-biking vs. over-biking engenders such passionate debate in the mountain bike community. The old adage that “it’s not the bike, it’s the rider” was probably more accurate back in the day when most bikes were pretty much the same – classic double triangles with klunker geometry, and then mostly XC-oriented angles.

Now that we have such a wealth of choices and styles of bikes to pick from, the decision can be agonizing if you’re forced to choose just one. It must be said, and if you’re being honest with yourself and the marketers are too, we must agree – there is no ONE bike that does everything perfectly. Just like your favourite pair of shoes, even the best all-’rounder will be inappropriate at some point.

To make the debate more complicated still, consider that “little bikes” – short travel rigs – are much more capable than those of yore. Hardtails too, for that matter, maybe especially. While it’s true that even pro DH racers in the early days were sending it on bikes with very little (usable) suspension, the tracks included a lot of fire road sections that, albeit sketchy, required more legs, lungs and bravado than active suspension. And suffice it to say that their race times would be obliterated by riders on modern DH race bikes.

While we’re on the topic of racing, it’s rare to hear racers or fans talk much about being over- or under-biked, unless they’re debating tire choice or suspension settings, perhaps. That’s obviously because each discipline of mountain bike racing dictates which type of bike ought to be used, so if you’ve got a specific event lined up, it’s pretty clear which bike you’ll be using. Horses for courses, right?

There will always be exceptions, of course. Jared Graves once famously podiumed in a World Champs DH race (2013), aboard his enduro bike with single-crown fork. The track was notoriously pedally, and he did swap out his smaller Fox 34 fork for a 180mm 36, which gave him more damping and a slacker bike overall. Graves still had to pedal though, so it’s not enough to say that a different type of bike will automatically guarantee a different result, whatever your goal happens to be.

You can take one bike and swap out parts or builds wholesale, to make the same bike more capable or fun for different trails or uses or situations. Most of us don’t race, but it wouldn’t be a stretch to say that you could take a good mid-travel full-suspension bike and set it up with grippier tires with thicker casings, and add more robust parts in crucial places to convert it for a one-off or occasional enduro race.

If that’s a scenario that sounds plausible to you, then it’s time to consider that your bike choice ought to be based on the type of riding that you might want to do at some point, and not just the type of riding that you do most of the time. If you have no desire to ever broaden the scope of your rides or stray too far from your local trail network, it should be easy to choose a bike that’s neither too much, nor too little for what you’ll be doing with it.

If you think that settles the over-under debate for most riders, well, think again. What if your local trail network is blessed with a variety of beginner/intermediate trails, but also has a great spread of trails that include not only greens and blues, but blacks and double-blacks? And it’s worth noting that blues in some places like Whistler, for example, might be double-blacks in many other places.

If you’re lucky enough to live in places like that, you might just reset your sights higher every season, or more often than that. Even if your current daily driver can handle more challenging terrain without breaking, or breaking you, into pieces, can you really say that you’re not under-biked if you’re not really attacking the trail at speed the way the trail builders meant it to be taken, or the way you see experts doing it?

If the bike you’re riding is holding you back from progressing because it’s not built to handle more aggressive trails than you normally ride, then you’re most likely under-biked. If you intentionally take a less-capable rig on gnarly trails to avoid committing to more challenging moves, then you’re really limited by the self-fulfilling prophecy of the “not enough bike” myth. I say “myth” because in the right hands, a good hardtail or short-travel bike will not prevent skilled riders from cleaning expert trails or features. We’ll get back to that in a minute.

When your skills as a rider have progressed to the point where you’re ready to take what comes, a longer-travel bike will help you gain confidence, knowing that the bike beneath you is built to take more of a beating. A bike with more forgiving suspension allows you to tackle the same trails at greater speed, and take different lines than you would on a stiffer setup. This will definitely increase the fun factor, and if you’re enjoying the ride more, isn’t that the whole point?

Kind of. But we all know that mountain biking is not an easy thing to do well, even if you get very good at it. Much of the reward comes from overcoming big challenges, and cleaning very technical or difficult obstacles and features. Speaking from the experience of swapping stiff short-travel rigs or hardtails for plush long-travel ones and back again several times, it’s fair to say that sometimes the over-biked option feels like you got the ‘cheat codes’ for a trail. They say cheaters never prosper, so I guess you end up paying for all that rowdy monster-trucking by having a more difficult climb to the top of the trail.

Climbing plays a starring role in the over-under bike debate, because obviously you’d like to be able to climb without blowing your brains out (or lungs, or legs…) before dropping in. Big or technical climbs are hard enough on the lightest bikes, so maybe you choose to under-bike if you have to err on one side, to try and lessen the inevitable suffering. If you can improve your climbing on a light, nimble bike, you’ll eventually excel at it and enjoy it more, and that is the whole point, right? 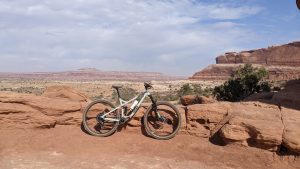 On the other hand, a good climber may take a bike whose design has prioritized the downs over the ups, and still bang out a huge climb on the way up to smashing out a big descent. If you like to take the downs at eye-watering speeds, then you’re happy to trade the extra effort of an over-biked climb for the mach-chicken descents. Or maybe you simply lack the confidence to hit those steep and fast trails without the extra cush, so you over-bike to make up for your own weaknesses.

Virtually every sport indulges in the stereotypes of the noob, novice or ‘Jerry’ that isn’t very talented yet, but somehow has the money to ‘front’ or ‘pose’ by buying up the flashiest, priciest gear that their skills aren’t nearly ‘worthy’ of. Like all of cycling, mountain biking is very gear-centric, so it’s easy to spot the people who overspend for their skill level, and they usually err on the side of over-biking, to make up for their shortcomings. If that’s what gets them out onto the trail and keeps them coming back, however, then it’s hard to argue against that approach.

There’s no doubt that a long-travel bike, while possibly being too much bike for most trails you may ride, will make you feel like a rock star on the gnarliest of descents. If you live for those moments and crave them all season while making plans to take yourself and your skills to greater heights – literally – then there’s no such thing as being over-biked, as far as you’re concerned.

Over-biking will also most definitely smooth out trails beneath you, and for many of us, that defeats the whole purpose of riding trail. There are certain sublime moments in a mountain bike ride that come from choosing the ‘right’ line and executing the moves, where you can really feel the terrain. Even your perception of speed changes when it’s hard-won, as opposed to when you’re plowing through copious travel, and all you feel is squish. This phenomenon isn’t unique to bikes, though.

Some cars are designed with stiff suspension, specifically to enhance road feel with a crisper dynamic. The result is a more exciting drive, because the greater the road feel, the more consistent is the experience with the other motion cues you perceive, like blurred surroundings. It’s an easy leap to bikes from here – relatively stiffer short-travel or hardtail bikes will really let you jibe with the terrain when what you’re seeing ahead of you gets translated right back into your hands, feet and bum, your points of contact.

So this raises the question of which is more important to you as a rider – that you cleared obstacles and completed a trail, or how you did it. Maybe then, the emphasis on the process as opposed to the result will go a long way to determining which bike is best suited to you. But we should learn to put value judgements aside. Within the mountain bike community, it seems that over-biking is seen as kind of shameful, and under-biking more virtuous. That’s probably because the origins of the sport lie with the rigid hardtails of the trailblazing pioneers of mountain biking.

Even a purist would agree though – bike technology has come so far, that it’s virtually impossible to make a bad choice. Today’s big bikes can climb much better than those old klunkers, and modern hardtails and little bikes can shred the descents better than old downhill bikes. Considering that, it’s plain to see that the best solution to the over-biked vs. under-biked dilemma, is to have more than one bike! If no ONE bike can rule it all, then maybe two or three can divide and conquer. Debating which is the perfect bike for everything becomes as pointless as looking for a unicorn, when all you need is horses for courses. Pick a bike, and try not to be a d*ck about it. And keep the rubber side down.