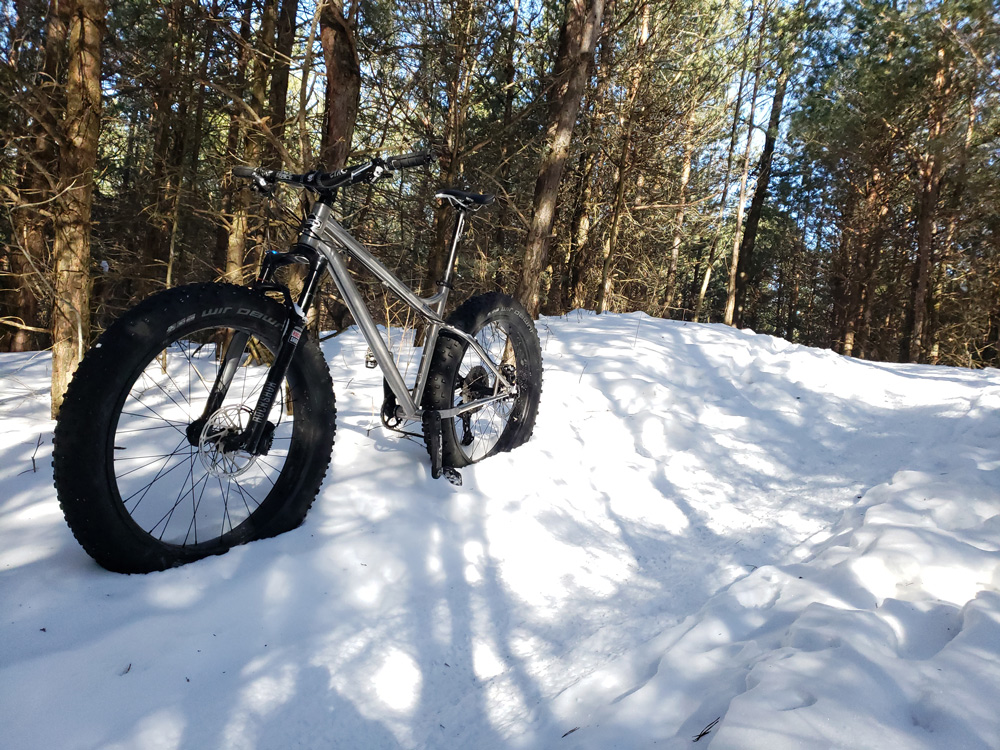 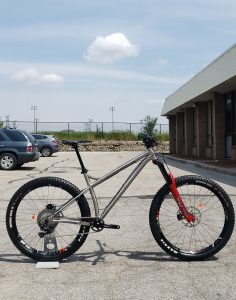 I once stood in a golf tee box up in the Laurentians of Quebec with three pals, one of whom had been playing this landowners-only course since his family built their modest cabin decades ago, when a question was posed. The question was – Would you rather keep playing one course and get really really good at it, or play a new course every week just for the thrill of the novelty?

Our homeboy who grew up there was definitely in camp A – he wanted to win the club championship one day, and he eventually did. I was firmly in camp B, like our pal who threw it out there, and we were both happy to trade mastery for novelty.

In either case, the common denominator would be the equipment – barring a wholesale swap of irons for new ones, the clubs would remain mostly the same, so control is still firmly in your, er, grip, whatever the scenario. It’s easy to see how this example translates for mountain biking, but if you’d like another personal story, here’s one.

We’ve got a friend, let’s call him ‘Z’. Z loves to build up new bikes often, sometimes real niche bikes that only a purist would love (or any bike lover with the spare cash, to be honest). And the builds are sick, but that’s beside the point. 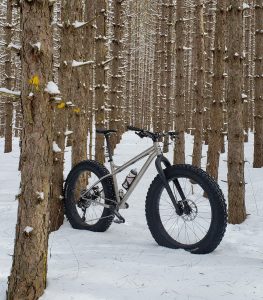 Ultimately, these bikes will get ridden, for the most part, on the same network of trails, in a long valley that splits town in half, east to west. There’s plenty of meat on those bones, and for a relatively shallow valley, the trails are techy enough to pose a real challenge to newbies, with occasional jumps and gaps thrown in. They’re the kind of trails that you could session on a ‘cross bike if you had good bike-handling skills, yet they still put solid mid-travel rigs to the test. Busy city life and work keep those sweet bikes in town all year, while they get swapped out in an enviable cycle of musical saddles, so to speak.

In either case, it would be easy enough to argue that most people aren’t fortunate enough to have any choice in the matter at all, since golf trips and mountain bike holidays abroad can both be very costly. Heck, even a weekend away in your home region can get expensive if you need to book rooms and buy lift tickets for a bike park.

But of course life is all about choices, and you could choose to trek to trail centres in a carpool, and even camp out for the duration while cooking your meals and drinking beers by the fire, instead of shelling out for a suite and dining out in bars and restaurants. However, if you’ve got enough scratch to build up a quiver of several nice bikes, you could arguably have one less bike (at least) and still be able to afford a decent week or two away each year, or several short overnighters if you’re lucky enough to live within a drive of some top-notch destinations.

Now, you may never bag any K- or Q- OMs on trails you only session once or twice a year, or a lifetime (or win the club championship!), but maybe that doesn’t matter to you. If you’re willing to ride a little less and work some more to bankroll riding trips in exotic and rad places, it probably doesn’t matter that you’re not the fastest on your local loops. And hey, if you choose to forego a nightly Netflix session, maybe you don’t even have to sacrifice the local ride while saving up for that dream bike holiday.

So how do you choose? You could put your head down and grind away at home all year while building towards a future of early retirement to a mountain bike mecca somewhere, and keep riding the same old trusty rig that’s fine for where you ride, or spice things up by treating yourself to New Bike Day every few months. Or you could stash new-bike money away and take that trusty rig of yours to new and different places all the time. 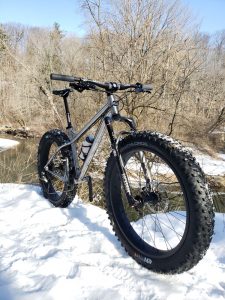 If you do that, you know that on some trails your steed will be perfect, but on many others it might leave you over- or under-gunned. If you’ve split the difference by building up a great all-rounder, you may never have to lament your choice, though you may have to adjust your style or your approach depending upon what the trail throws at you.

If you’re like me – sensible but not wealthy, and pragmatic but prone to overspending on bikes – you’re gonna argue that the quiver needs more arrows than just the one workhorse (how’s that for mixing up metaphors?). Okay, so what’s it gonna be – one hardtail and one full-sus, or maybe one short-travel rig and one long-travel? Those two scenarios could play out the same, but the point is that you still have to choose. Should you have a slopestyle/dj bike as a second (or third) option? Perhaps a fat bike instead of cross-country skis, or even a trail dog in lieu of a new trail bike? A full-on DH bike and a trail bike makes the most sense if you live near a bike park, but even that seemingly logical choice is based on yet another major decision you’ve got to make. Will you eschew the amenities and earnings potential of a big urban centre, pull up stakes and relocate to a small mountain town where the trails are bountiful, but the opportunities are fewer?

It’s said that a good life is all about balance, but in the end you must decide for yourself what tips the happiness scales for you one way or the other. This dilemma rears up every time you choose to build a new bike – which blingy parts will deliver maximum bang for your buck, or just as importantly – what colour will your sweet new frame be??

For real though, as your desires change with your priorities (or other way around?), what bike it will be that stokes your fire to ride is not a choice made lightly. I suppose it’s always best to choose a bike that best suits your local terrain and typical ride ambitions, but maybe that old adage about dressing for the job you want, not the job you have, applies here too.

Maybe you go bigger and longer because you aspire to take that new whip into some big alpine terrain, and you suffer a little while you sweat the small stuff on a bike that’s more than enough. Maybe you want to challenge yourself to ride bigger and gnarlier lines in unknown places that you dream about, instead of shaving grams and laying down the fastest times on your local favourites. 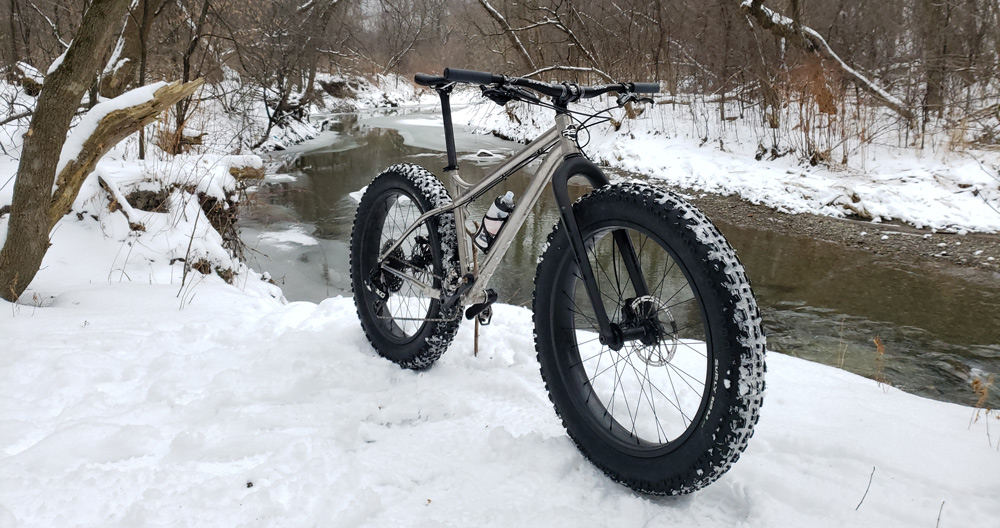 You might want to suggest that money can buy happiness and that that will end the debate of quality vs. quantity. Maybe, like most people, you’re even hoping to hit pay dirt some day and prove it, but don’t forget that if you’re wealthy then you’ve got to decide between which of your baller rigs you’ll ride (and where), and the zillion other things that you might and could do when money is no object.

In a world where distractions abound and stress is on the rise everywhere, it’s fair to say that as long as you’re out riding bikes, any bikes, anywhere at all, then you’ve made the right choices. And we should all be so lucky that we have at least one bike to ride and a place to shred. After all, when the trail is open ahead of you, the only bike you need is the one you’re on, and the only way to go is forward. Just keep the rubber side down and you’re golden.